Criminal mischief is a statutory crime in Texas. But while its definition is broad, it has several layers from trivial crimes that have lenient consequences to first-degree felony crimes with severe penalties.

The Texas Penal Code 28.03 defines criminal mischief by giving specific examples of actions that fall under these crimes. The statute indicates:

(a) A person commits an offense if, without the effective consent of the owner:

(1) he intentionally or knowingly damages or destroys the tangible property of the owner;

(2) he intentionally or knowingly tampers with the tangible property of the owner and causes pecuniary loss or substantial inconvenience to the owner or a third person; or

(3) he intentionally or knowingly makes markings, including inscriptions, slogans, drawings, or paintings, on the tangible property of the owner.

Criminal mischief only involves the damage of physical things.

What Determines Consequences For Criminal Mischief? 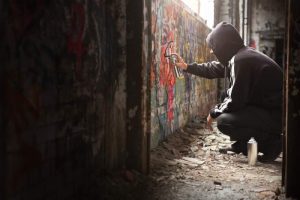 Factors that determine whether criminal mischief occurred or the severity of punishment for the crime include:

These places are protected because they are out in public making them vulnerable to vandals. If vandals damage any kind of tangible property, people could get hurt or may not be able to access services they paid for. Fixing vandalized, destroyed, or tampered with tangible property can also be very costly.

Defending Against Charges of Criminal Mischief

Just because you or someone you know is charged with criminal mischief does not indicate you will be convicted. Authorities may not have enough evidence to prove each part of the criminal-mischief allegation, in which case the charge should be dismissed before or during the trial.

Here’s an excellent example. The defendant must have intended or known that the damage or destruction was of another’s property without that other’s agreement, according to Texas Penal Code 28.03(a). Many factors can lead a person to feel that they are only affecting their own property or the property of someone who has granted them permission. Fact issues of purpose and knowledge are inherently under the defendant’s control and influence in a disagreement about the defendant’s own state of mind.

Criminal mischief is also subject to a number of defenses under Texas law. Consent, mistake of fact, and necessity are three defenses recognized by Texas law, and they may apply to a criminal-mischief prosecution in particular. An experienced criminal defense attorney will be able to assist you and and answer questions you might be pondering.